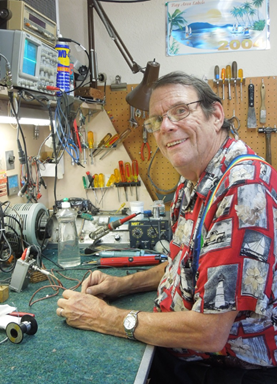 In my new shop.

Who is Dick Bull

I married my wife in 1964, she square danced as a teen, When in Morocco with the Navy she got me started dancing, that was 1965. When our caller was ordered out I thought I would take up calling. When we left in 6months later I threw away all the paper work and said "never again"

Continuing to dance, we arrived in Naples in 1972, they had no caller and were dancing to a limited number of now memorized records, our collection of Sets in Order 33's was a bright light. I agreed to "teach" in order to keep enough squares going.  And so calling in earnest started. I was a member of the "European Callers and Teachers Association from 73 to 79.

Returning to the states in 1979 as a Navy Recruiter, I could not make a weekly commitment to a club. An Eastern mountain caller got me started doing non-dancer one night stands, and continue to do them to a limited (bad knees) extent.

When retiring after 22 years in the navy, I was living 40 miles north of Concord. I wrote Jim Hilton asking if he had a job for a caller with 28 years electronics experience. I was hired and Dick Henschel promoted me to Head Technician after taking over the company from Jim.

I have worked on the designs of all new Hilton Audio products since the AC-201 in 1989. With the down sizing of the square dance activity and the resulting down sizing of Hilton I have personally done all of the estimating and repair work for many years.